Skip to content
Home > Events > Protest Letters: Then and Now 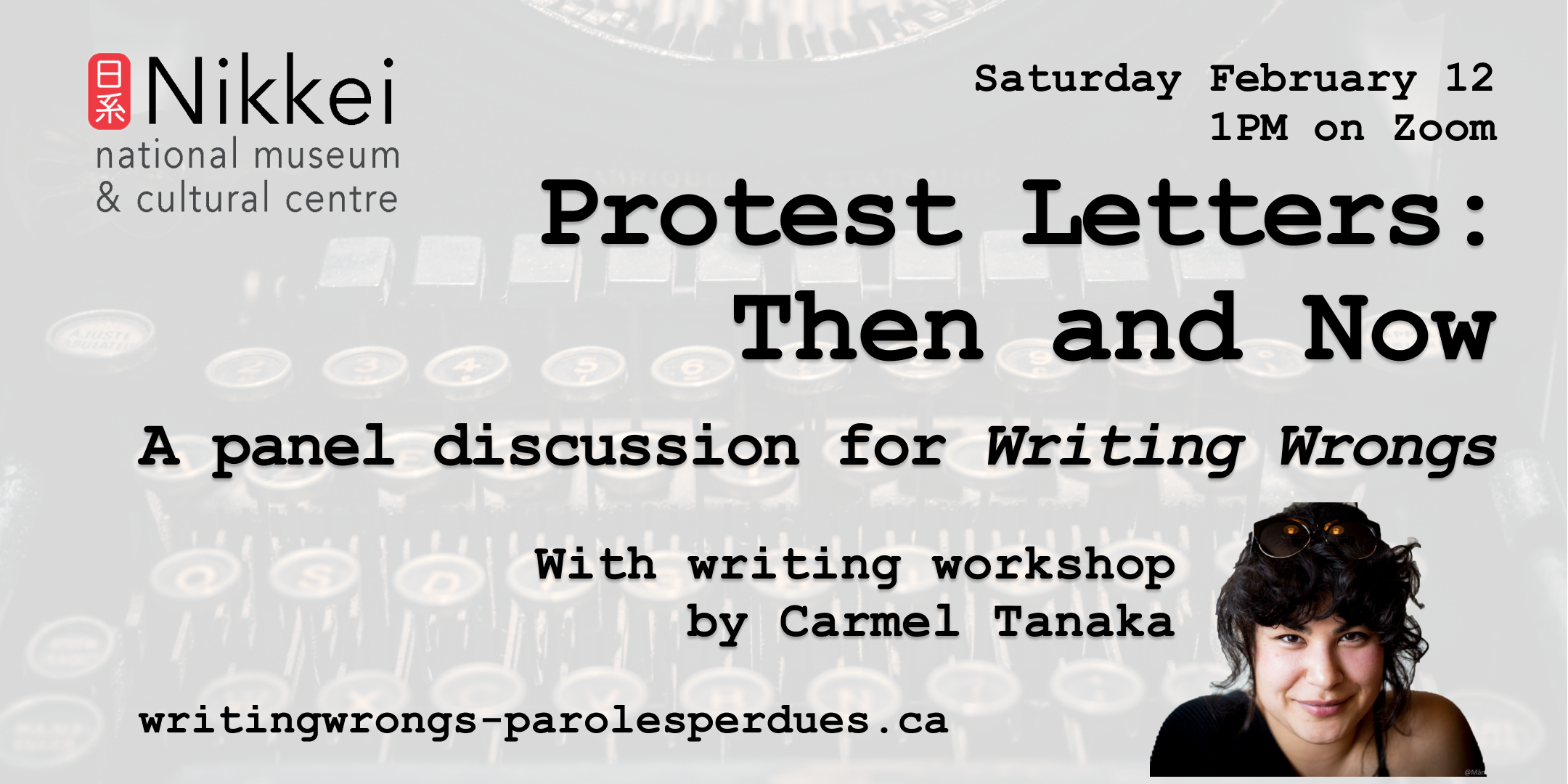 A discussion and workshop for Writing Wrongs

On Saturday, February 12, join us in reflecting on this legacy in a virtual panel discussion featuring community members who have participated in Writing Wrongs.

Following the discussion, there will be a workshop led by Carmel Tanaka about writing letters of protest.

During the 1940s, the Canadian government seized and sold the property of Japanese Canadians without their consent. Based on a collection of more than 300 letters protesting this injustice, Writing Wrongs brings to life the story of Japanese Canadian internment and dispossession during the Second World War, along with a powerful and moving exploration of citizenship, justice, and equal rights.

Writing Wrongs is the culmination of 4 years of dedicated coordination between academic, museum, and community council partners of the Landscapes of Injustice (LOI) research + public history project. The Nikkei National Museum was tasked to find funding to produce a significant digital exhibit on a file of letters of protest that was part of the research of LOI, and thanks to Digital Museums Canada and advice from the Royal British Columbia Museum, the NNM landed a significant project fund which enabled the museum to invite Tabata Productions and NGX Interactive to help co-produce this online exhibit. Project-led by NNM Director|Curator Sherri Kajiwara and project-managed by Education Program Developer Carolyn Nakagawa, who worked closely with the immensely talented digital content creator Susanne Tabata and the technical experts at NGX who both managed their respective complex teams, Writing Wrongs will remain accessible to the public for the next decade. The online exhibit launched in March 2021.

Writing protest letters can be a powerful tool of resilience. Join Carmel Tanaka in writing a letter of your choosing – perhaps to a MLA/MP or to an ancestor who wrote a protest letter – about a cause or issue close to your heart in a 45-minute workshop. Creative forms of expression such as visual arts, music and mixed media are also welcomed. Participation is voluntary, as is sharing the fruits of our labour in the workshop.

Carmel Tanaka is a queer neurodivergent Jewpanese woman of colour from Vancouver on the unceded territories of the Musqueam, Squamish and Tsleil-Waututh peoples. She is a community engagement professional and her leadership initiatives include: JQT Vancouver, Genocide Prevention BC, and Cross Cultural Walking Tours. She is the granddaughter of interned Japanese Canadians on her father’s side and Holocaust survivors on her mother’s side.