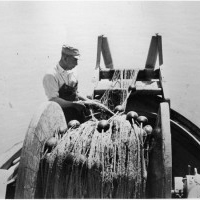 Nikkei Fishermen of the BC Coast

From the bustling docks of Steveston to remote inlets on the northern Coast, Japanese Canadians have made unique contribution to fishing in BC both before and after the war. Their story is intertwined with the labour and political history of BC – before 1949, the province had some of the toughest racial exclusion laws in Canada. With pride and perseverance, the Nikkei community proved their skill as fishermen and cannery works, and built a new life as Canadian citizens.

Saturday, September 29, 2012
2:00-3:00pm
Gallery Tour
Join us for a personalized tour of the Ryoshi: Nikkei Fishermen of the BC Coast exhibit. Culture Days is a coast-to-coast-to-coast celebration of the arts in Canada. culturedays.ca

Thursday, May 9, 2013
7:00 pm
Speaker Series: Helen Vandenberg
The History of the Establishment of the Japanese Hospital in Steveston
More info