On October 23, 2020, the Consul General of Japan in Vancouver presented the Consul General’s Commendation to Nikkei National Museum & Cultural Centre’s former Board president Akiko Gomyo. Akiko has been a dedicated community leader, supporter and advocate for the Nikkei and Japanese Canadian community for decades. 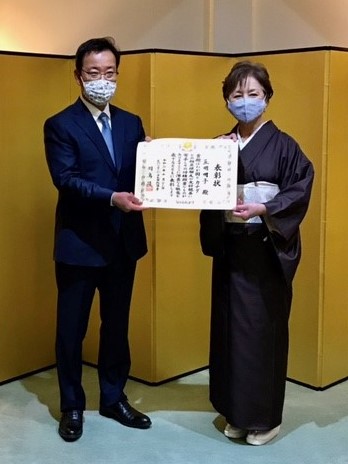 Akiko Gomyo expressed her gratitude to Consul General Hatori and his staff, as well as acknowledged support from Nikkei Centre board and staff. Photo © Louise Akuzawa

Herb Ono, President of the board, Nikkei Centre thanked Akiko Gomyo for her guidance and took the toast. Photo © Louise Akuzawa

The Consul General’s Commendation is an honorary award bestowed upon individuals and groups who have contributed to the promotion of mutual appreciation and friendly relations between Japan and various foreign countries. It is presented by Ambassadors and Consuls General of Japan stationed in various countries and regions.

Akiko is one of three individual and group recipients of this award this year. She is honoured for her contributions to the development of the Nikkei Community and promotion of mutual understanding and friendly relations between Japan and Canada.

On behalf of the board of directors of the Nikkei National Museum and Cultural Centre, I am pleased to congratulate former director and past president Akiko Gomiyo on the occasion of her receipt of the Consul General’s Commendation.  We cannot think of a more deserving recipient of this honor than Akiko, who has tirelessly devoted herself to advancing the NNMCC’s mission to honour, preserve and share Japanese culture, and Japanese Canadian history and heritage, for a better Canada.

We extend our sincerest congratulations to Akiko for her continuous efforts to better our community!