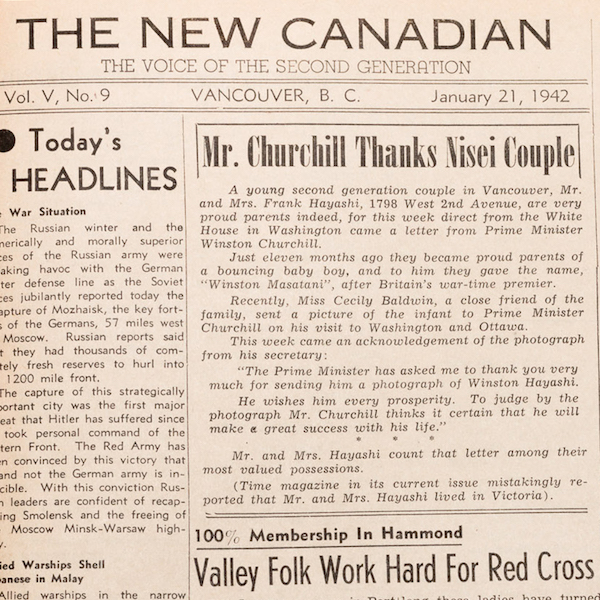 In 2017, the 75th anniversary of the forced dispersal of Japanese Canadians and Canada's 150th anniversary, we look back to 1942, which was the year of Canada's 75th anniversary. We do so to raise questions about the meaning of anniversaries, recall the complex history of Canada, and inspire a resilient and ambitious vision for what Canada can become in the next 75 years and beyond.

Canada 75 is a commemorative project running throughout 2017.

Each month, the Nikkei National Museum will print and display at Nikkei Centre a different front page from a 1942 issue of The New Canadian, the English-language Japanese Canadian community newspaper which published from 1939 to 2001. Additional issues of The New Canadian will be featured on the museum's Facebook and Twitter accounts with the hashtag #Canada75 .

In 1942, shortly after Canada declared war on Japan, The New Canadian became an essential resource for a community whose lives were thrown into incredible uncertainty in the face of growing racist anti-Japanese sentiment from all levels of government and many vocal members of the public. The New Canadian followed Japanese Canadians as they were forced out of established, tight-knit communities along the west coast into various internment camps and other unfamiliar and isolating environments, providing essential news to a scattered community.

Explore the digitized archives of The New Canadian here.

This project has been made possible with funding from the Government of Canada - Building Communities in Arts and Heritage and Documentary Heritage Communities Programs.