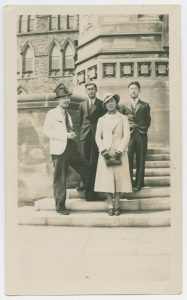 At 18 years of age, Hide Hyodo Shimizu was the first Japanese Canadian teacher to teach in British Columbia's public school system. She was part of the delegation sent to Ottawa in 1936 to campaign for voting rights for Japanese Canadians, along with Samuel Hayakawa, Edward Banno and Minoru Kobayashi. She was responsible for organizing schools in the internment camps in British Columbia and later moved to Ontario to attend art college.