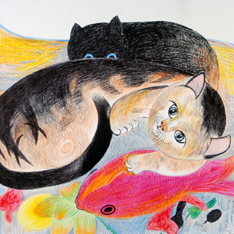 Jimmy Tsutomu Mirikitani is a fiercely independent, 90-year-old Japanese American artist who lost his family and friends to the United States internment camps during World War II and Hiroshima's atomic bombing. He has survived the trauma of those two significant events and homelessness by creating art every day. This remarkable exhibition about the art and life of Mr. Mirikitani is a poignant exploration of the lasting impacts of war and discrimination, and the healing power of creativity.

Curated by Roger Shimomura and produced by The Wing Luke Asian Museum. Created in association with The Cats of Mirikitani, produced by Linda Hattendorf and Masa Yoshikawa.

The award-winning film, The Cats of Mirikitani, will be screened at the following times:
Thursday, February 3, 7pm
Saturday, February 26, 2pm
Saturday, March 26 at 2pm
Suggested donation $5
Join us for a guided gallery tour after the screening.